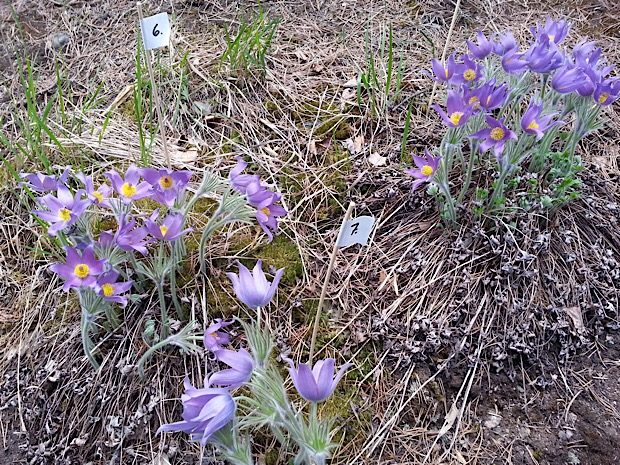 Perennial eastern pasqueflower is wholly dependent on seed production in its reproduction.

In 2017 was started a detailed study on the numbers of individuals, flowering and environmental factors in co-operation with Jutila and Lammin biological station. To improve the follow-up of eastern pasqueflower individuals they have been marked with numbers in study populations, which are e.g. Hevospierttämä, Ruskeanmullanharju and Tunturivuori. The numbers are important for the study and we hope that they are left undisturbed. In the future years we can more accurately tell, how the situation of one individuals develops during years.

Part of the research is to study environmental factors in the pasqueflower populations. Amount of light is essential factor for the occurrence and flowering of the species. Thus, it has been measured with sessile sensors put in the field, with mobile sensors and by photographing canopy density with a fish eye lens and further processing this information. Necessary permits have been acquired for the studies.

All the known eastern pasqueflower populations exist in Kanta-Häme, and biggest part of the populations are in nature conservation areas. For pasqueflowers to survive it is essential that the forest does not close up too much. That is why pasqueflower areas have been managed. At the moment Paahde-Life project by the Forest Service has opened the soil surface and planted eastern pasqueflowers. For example in Ahvenisto the seedlings have survived well and grown quite a bit.

Perennial eastern pasqueflower is wholly dependent on seed production in its reproduction. It needs bare mineral soil seed to germinate and light, which the forest fires used to create and competition-free growth environment for the seedlings. To help eastern pasqueflower trees have been spaced out and soil has been opened. Prescribed burning can also be used near the populations. In Ruskeanmullanharju ash has been spread on the base of some eastern pasqueflowers.

Eastern pasqueflower has been protected as species according to the nature conservation act since year 1952. It is classified are endangered and specially protected species. It is forbidden to weaken and destroy the establishment sites of this species. The eastern pasqueflower is protected also by the European Union nature directive?s (92/43/ETY) appendix II and IV and the Bern commitment.